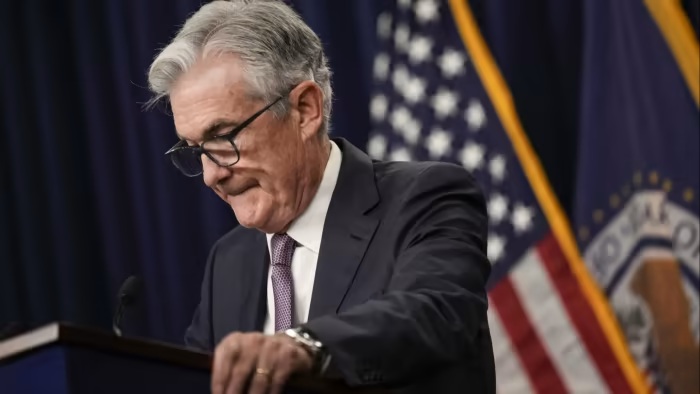 Inflation in the US is still so high that their central bank (the Fed) has decided yet again to increase interest rates. This time they raised the “benchmark interest rate to a target range of 3 per cent to 3.25 per cent” by 0.75%, which is the second consecutive such hike. As I mentioned in an earlier post, the June 2022 hike of 0.75% was the first such large interest rate increase since 1994. And now the Fed seems to continue its tight (contractionary) monetary policy.

When the benchmark interest rate target increases it follows that commercial banks in the future will also increase the market interest rates they charge to their clients (households and firms). As a result, the costs of borrowing will increase, while savings will become more attractive. This leads to less consumption by households and less investment by firms, ultimately decreasing aggregate demand (AD). When AD falls (in an AD/AS diagram) the average price level also drops, indicating deflation.

Note that in reality, it is quite unlikely that deflation will occur, instead – in line with the hopes of the Fed – what is more likely to happen is that inflationary pressure will ease (lower inflation). Yet, it must also be noted that this can lower economic growth or even lead to a recession (shown in the AD/AS model by a drop on the real GDP axis).

Moreover, this likely increases unemployment, as if there are lower amounts of purchases (of consumer and capital goods), then there is less production, leading to lower demand for workers. As the article states, “They forecast the unemployment rate rising from its current rate of 3.7 per cent to 4.4 per cent in 2023, where it is expected to stay until the end of 2024”.

What the future brings

Interestingly, the Fed chairman was not “dovish” as he claimed they “will keep at it until we’re confident the job is done.” This means that in the future, even more interest rate hikes can be expected. Check out this fantastic chart which shows interest rate projections at different FOMC meetings. The last word of the article “overthightening” refers to when too much contractionary monetary policy (i.e. interest rates raised too high) can lead to a fall in real GDP (recession). While it is clear that in the past the US central bank was worrying about it, it is considering future rate hike a huge concern any more.

This is a great article that you can use for your Macroeconomics IA. While most usually articles that are from the Economist or the Financial Times are not suitable for an IB Economics commentary as they include too much analysis, in this case you definitely have room to develop your own analysis and evaluation. You can use intervention, economic well-being and even change as a key concept. Make sure you evaluate the effectiveness of the contractionary monetary policy, prioritizing your arguments and referring to short-run vs. long-run outcomes.